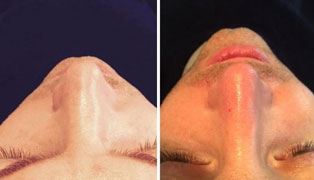 We are very proud that the Daily Telegraph has written a wonderful article about Dr Nick Milojevic and his signature treatment of non-surgical nose shaping (non surgical nose job procedure). The journalist was delighted with his new nose!

Would you join the 5,000 men who have cosmetic surgery each year? I did…

I was always told not to stick my nose into other peoples’ business. But, when the one you have still boasts the trauma of a teenage sports injury, sometimes an outsider’s expertise can be the only solution.

Given that men are going under the knife in record numbers, plenty of others clearly agree. Statistics for 2015 by BAAPS (the British Association of Aesthetic and Plastic Surgeons) revealed the blokes having work done increased to 4,614 from 2,440 in 2005. Even more shockingly, I was about to join them.

The decision comes twenty years after a spirited game of football left me with a bloody nose… and a bump which acted as a lasting memento of a humiliating 4-1 defeat.

Not that it was bad enough to keep me awake at night, of course, but for a perfectionist like me, it was a mild annoyance. Yes, most of the time I could ignore it, but every now and again I’d catch myself in certain lights and be irked by its centimetre presence.

Over time it became like a nagging note on a ‘to do’ list – akin to a creaking cupboard door or the proverbial dripping tap. And, as someone who’s a fixer, I was always compelled to do something about it. But what, exactly?

I certainly didn’t want to undergo the drama of a rhinoplasty, which (quite literally) sees a masked surgeon take a hammer and chisel to my face, leading to black eyes, bed-rest and an embarrassing cast. No way. Then again, there seemed little alternative, which – in a world where Richard Branson is planning to send people to the moon – was frustrating.

In fact, when mind-over-matter failed, there were moments of frustration-inspired madness when I truly thought good, old-fashioned home remedies might be the answer… a bit of regularly applied pressure, perhaps, or some brave, bite-the-bullet shaving with a file from my tool kit. Fortunately, a quick look at the DIY in my flat put an abrupt end to that.

Instead, I needed something more proportionate, yet still professional – which, thanks to my GP, led me to the non-surgical nose job. Something I’d never really heard of, but is apparently one of the most popular procedures among us fellas.

A ten-minute tweak which sees dermal filler injected into the outer nose to provide the optical illusion of symmetry and smoothness, it cleverly makes the nose look smaller by increasing its size. The best bit? It’s discreet and has no down-time, meaning no sick leave, no pain.

Oh, and with a price tag of £700, it was 90 per cent cheaper than a typical rhinoplasty. Now you’re talking.

However, I quickly learned that it wasn’t without its own risks. Friends in the industry shared horror stories of people who’d been left with necrosis (tissue death), pulmonary embolisms and blindness by amateur practitioners who accidentally injected the material into blood vessels, but – because I don’t scare easy – I took it all with a pinch of salt.

That was until I stupidly responded to an advert on a famous voucher code website, which saw one woman try to perform the procedure within minutes of me entering her rented ‘office’ – without actually bothering to examine my face or mental state.

Needless to say, I didn’t stay. But it was the wake-up call I needed.

Fortunately, the research I then undertook pointed me in the direction of Harley Street’s Dr Nick Milojevic, who’s touted as a celebrity favourite. His work, I was reassured, was all filler, no killer. Thank God.

During our consultation (in which I spent much of the time surreptitiously looking as his nose) he interviewed me as much as I did him. Interestingly, he revealed that he often turns people down (“If a patient has unrealistic expectations or if the request is not one that we can fulfill”) and has been operating in the capital for more than a decade.

Weeks later, after insisting I go away and think about it, I was back in his chair with a needle pointing at my nose. “You may feel a little prick,“ he said, without irony. But, before I could laugh our make an inappropriate joke, he was already injecting Restylane (stabilised hyaluronic acid, which is already present in the body – thus natural) into the area around the unsightly bump.

Painless, it felt no more uncomfortable than having my gums numbed at the dentist.

Then, as I braced myself for some intricate artistry, he handed me a mirror. It was over.

Instantly, I was delighted with the results. For the first time in two decades my nose was symmetrical.

The bump, which previously seemed to exert so much power over me, had suddenly gone – and, with it, went all the precious time I’d spent thinking about it. Secretly, I felt foolish for not being decisive enough to do it sooner.

Then again, Dr Milojevic reassured me, the procedure is only now hitting its stride.

“It only became available about eight years ago and the dermal fillers are improving every day, making this now a very refined procedure with great results,” he explained.

“This is perfect for any patient with a bump on their nose, but is especially good for someone like Owen Wilson who has a crooked and very uneven nose.

“With careful application, he could certainly achieve a really nice and natural result. Owen would not be changed much, and indeed people might not realise that he had something done, but he would look better.

“This is the beauty of this treatment… and the appeal for so many men. The fact that people won’t know they’ve had it done.”

And, given the huge spike in numbers, that’s a clearly a convincing selling point.

“Twelve years ago, at the beginning of my career, only ten per cent of my patients were men. Now, it’s more like forty per cent.

“Noses are the most common request, because of minor sports injuries, but men are also having non-surgical eye-bag removal and botox for excessive underarm perspiring.