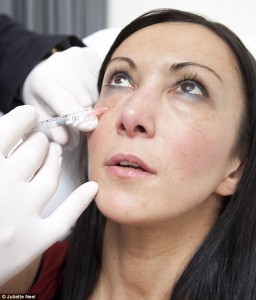 They say the eyes are the windows to the soul. And I’d always regarded mine as my best feature until two distinct ledges seemed to form under my windows.

Some days my eyes simply looked a little puffy, but throw in a few late nights and I soon looked as if I’d gone a couple of rounds with Mike Tyson.

My eyebags were caused by a combination of bad genes and lifestyle. An abundance of nights spent dancing and drinking, coupled with copious amounts of caffeine, had contributed. As for genetics, I had my father to blame for that.

Daily Mail: The NO-KNIFE nose job: the revolutionary procedure that smooths out bumps - without surgery