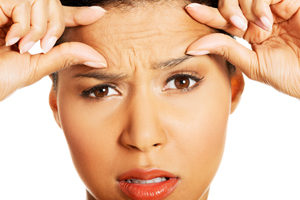 Low eyebrows appear to be drooping, as skin and soft tissue lose elasticity with age. This causes the distance between the eyebrows and eyelashes to shorten, often making someone look constantly fatigued or sad. This symptom may also be caused by a condition called Ptosis.

More severe drooping eyebrows can cause the upper eyelids to droop down too, which can interfere with eyesight. An upper eyelid bulge that overlaps the eyelashes can also cause eyes to become smaller and deeper set than they were previously.

Some low eyebrows are caused by lack of sleep, stress and fatigue, but more commonly they are associated with signs of ageing.

We provide the following treatments for Low Eyebrows: